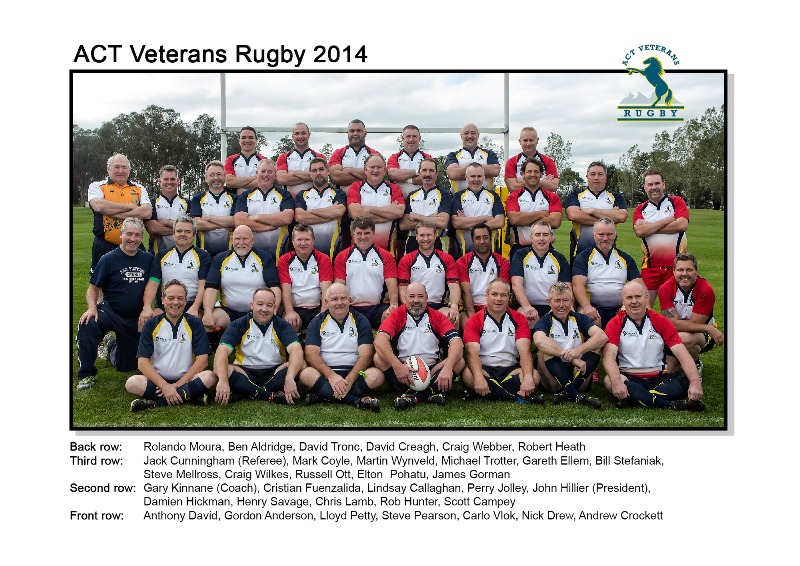 2014 team photo with thanks to Michael Thompson Photography

The Governor-General of the Commonwealth of Australia, His Excellency General the Honourable David Hurley AC, DSC (Retd)

If you're 35 or older and would like to play rugby in Canberra, join us every three weeks (or so) for a friendly game at Portsea Oval, RMC Duntroon and post-match social drink at Mercure Hotel.

We have raised over $300,000 for our charities of choice; Legacy, the George Gregan Foundation, Menslink as well as Clare Holland House and the Paediatrics Unit of the Canberra Hospital thanks to our sponsors. We look forward to continuing to support these people as we put our bodies on the line against a variety of Defence Force teams in charity matches. Not bad for a group of blokes who just want to run around and have some fun!

If what we do sounds interesting or the idea of rediscovering (or finding for the first time) your love of Rugby is something that you’ve been meaning to do something about, come and see us at training every Wednesday evening at Kapyong Field, RMC Duntroon or see our fixtures for game dates and join the fraternity that is ACT Vets Rugby.

To find out more details on enjoying a match or 20 every season with a group of like-minded ex and current rugby players from in and around the ACT either drop by or email: enquiries@actvetsrugby.org.au

The laws for Veterans Rugby are those as writ by the International Rugby Board with the following concessions:

If you're new to rugby, World Rugby has produced a Beginner's Guide to Rugby (2.8MB download). The Guide provides useful information about the laws of the game, positions and how to play.

PLAYER REGISTRATION IS OBLIGATORY AND A REQUIREMENT OF OUR INSURANCE POLICY

Players can either register for the whole year or pay week by week when they are available to play. Receipts can be issued for either payment option upon request.

The registration fee is:

The registration form can either be emailed to the Club Treasurer, or given to one of the committee members at our first game. Consider this; if you only play seven of our scheduled twenty games, you're better off financially to pay 'up-front' than week by week.

The registration fee covers the cost of:

The other little incentive for players to pay a full year's registration 'up-front' is that the opportunity to play in the 'Curtain Raiser' for a Brumbies home game of the Super Rugby season at Canberra Stadium will only be available to those players who have paid their $150 registration before or at the first ACT Vets game of the year.